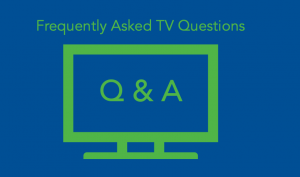 As part of our Operations Planning and Outreach Process, we’re fielding many great questions! Take a look at our responses to commonly asked questions.

As of now, no. Met Rec is located within the Denver Designated Market Area (DMA).  The Denver DMA is the area in which local network affiliates have exclusive broadcast rights. This means Met Rec can only broadcast stations from the Denver DMA.  Grand Junction network stations have not been approved for broadcasting in our area.

As a Special District, Met Rec is bound by Colorado State Statutes. The Special District Statues outline the services provided by Special Districts and the parameters in which they can be delivered. When it comes to television service, we are required to deliver the service in relay fashion utilizing over-the-air translator facilities. This means that we’re unable to provide television services via additional means, such as wireless internet or cellular service as a mechanism for receiving TV. This is why we partner with other service providers by allowing them to utilize Met Rec’s existing, strategically located translator sites.

Read this News & Insights Post to learn about how we accommodate service providers at tower sites!

Can the number of channels provided be expanded or can Premium news or sports channels be added?

Each channel Met Rec broadcasts requires a certain amount of bandwidth.  The amount of bandwidth Met Rec can utilize must be approved by the Federal Communication Commission (FCC).  If Met Rec wishes to acquire additional bandwidth, we must apply for the applicable license(s) from the FCC.  The FCC accepts such applications at certain times. The next application window is not expected to open for 1-2 years.

Most Premium channels, such as Fox News, CNN and ESPN, are only allowed to be re-broadcast by cable companies and satellite TV providers who must pay for each customer.

Do I have to use an outdoor antenna to receive Met Rec’s television signal?

A good example of how this can play out is in Gunnison. The W Mountain translator site, that provides the Gunnison signal, broadcasts a combination of high-band VHF and low-band VHF frequencies.  There are numerous indoor antennas that would perform adequately if you’re only receiving UHF signals. However, there are only a handful of antennas that would work effectively if you seek to also collect the high-band VHF frequencies.  There are no indoor antennas rated for receiving low-band VHF.

The indoor antennas for high-band VHF are not small antennas, but about 35-inch long antennas. The size is needed as the low-band VHF signals are much lower frequency (or much longer wavelength) and require the larger size to collect the signals thus requiring outside antennas.

Does Met Rec know when there is a television outage?

It depends!  The Met Rec television signal is relayed, in a daisy chain fashion, from one translator site to the next. If there is an outage at the Gunnison Studio, on Monarch, or at the W Mountain translator site, we will know about it.  However, if there is an issue at a more remote site that disrupts the television service, we must currently rely on viewers to report the issue.  This is because we cannot yet have two-way communications to monitor the status of equipment at all sites.

The good news is that as we continue to upgrade the system, we’re investing in new equipment that accommodates remote monitoring ability. In time, we hope to have the majority of Met Rec’s translator sites tied into our remote monitoring capabilities!

So, for now, please continue to call-in or submit your observations online!  It helps us tremendously!

What is ATSC 3.0 and will I have to upgrade my television set-up?

The Advanced Television Systems Committee (ATSC) is an international group made up of broadcasters, TV manufacturers and tech companies, tasked with deciding what over-the-air TV signals should look like.

ATSC 3.0 is the new standard for over-the-air channels. It is expected to bring improved viewing experience with higher audio and video quality and transmission for reception on fixed and mobile devices.

However, ATSC 3.0 will likely come with a caveat. While ATSC 3.0 will work with any antenna, it’s incompatible with ATSC 1.0 tuners that are built into today’s TVs, converter boxes and DVRs. With this said, over-the-air television viewers looking to take advantage of ATSC 3.0 will likely need new hardware, but the details and consistencies are still being worked out at an industry level.

GET THE ONLINE CHANNEL GUIDE